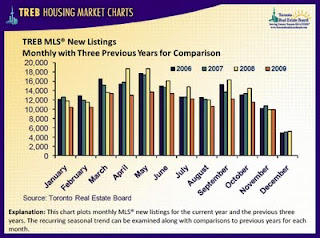 December 3, 2009 -- Greater Toronto REALTORS® reported 7,446 sales in November – slightly more than double the November 2008 result when GTA home sales had dipped markedly due to the economic downturn. Year-to-date sales were up 14 per cent compared to the first 11 months of 2008.
“This year in the GTA home sales will be in line with the healthy levels experienced between 2004 and 2006,” said Toronto Real Estate Board President Tom Lebour. “Increased resale home transactions in the Toronto area and country-wide played a key role in pushing the Canadian economy out of recession in the third quarter.”
The average price for November transactions was up 14 per cent year-over-year to $418,460. The average price year-to-date was up four per cent to $394,464.
“Very strong annual growth rates for sales and average price should be expected through the first quarter of 2010, because we will be comparing the current recovery to the housing market decline experienced last winter,” according to Jason Mercer, TREB’s Senior Manager of Market Analysis. “As we move into the spring, growth rates will move to more sustainable levels.”
We expected November would be near 8,000 sales. November 2009 ended up being the highest November in history for number of sales reported to TREB with 7,435 sales.
The Sellers Market continues with inventory levels are continuing to fall. (Fewer Homes for Sale) As of November 30th there were only 13,344 homes for sale. To put things into perspective, compared to 2007 which was a “hot” market, we had slightly more sales this November but currently there are 27% fewer homes for sale vs. November 2007 (18,309). Lets forget last years gutt renching price ride. Those who jumped while others held their breath made 20%.

Look again at the graph above. Seasonally adjusted hmes for sale really drop off in December. The next few weeks are when many sellers traditionally put off plans to list their homes until after the holidays. There is still a strong pent-up supply of HOT buyers right now and in many cases, they are competing over a supply of homes that is dropping everyday. Right now is probably the best time possible for anyone to list their home.

Interesting stats report...appreciated!    I think this is mirrored in Vancouver, too, but it's not as active in the rural areas of B.C.    Same in Ontario??    Also, remains quiet in the luxury category.   Same with Ontario?

Posted by Li Read, Caring expertise...knowledge for you! (Sea to Sky Premier Properties (Salt Spring)) over 10 years ago

David, You have sold me on the West End! And with the GO train and the QEW, you are just minutes from TO's core!  Well, done, as usual!

This blog does not allow anonymous comments